L'ETAPE SLOVENIA - FROM OVERSTEPPED FEET TO AN EXCEPTIONAL EXPERIENCE

L'Etape by Tour de France. Cycling magic that will leave you dazzled. A race for all. A race against everyone. A race against yourself. A journey to experience. Highly addictive. I've completed the race twice within the Czech Republic.

For me, the scores are kind of unfinished. Finishing in the second half of the starting field on the first L'Etape in the Czech Republic on a long route. This year was a blast, a DNF, and remorse for my stupidity over chasing the result. Thus, a plan to participate in the L'Etape Czech Republic by Tour de France 2023 on the new middle route. Nevertheless, that's still a long way to go. That's also why July's motivation to train has eased a bit...

"Will you come with me to Slovenia for L'Etape?"

A message from a friend during the third week of August leaves me to ice cold. "Yeah, sure," I write back with a slight hint of irony. A week earlier, Covid outsprinted me the same way as Michal Kollert had his opponents in the Czech and L'Etape Slovakia.

I have three thousand kilometres in my legs, but about two hundred in the holiday season. Just nothing that would justify me flirting with the idea of cycling further than the borders of the district...

"Send the data needed to register." The message a week later doesn't leave much room for doubt that, instead of irony, an actual physical was needed immediately... I quickly look up the route profile. Seventy kilometers and 700 vertical meters short, one hundred and forty and 2020 vertical meters long.
I manage two more short "training runs" of fifty and forty-five kilometres. Feelings? They closely mimic three weeks filled with battling covid...

But there's no turning back. We enter the finish town of Kranj in Slovenia into the navigation and set off on Friday, two days before L'Etape Slovenia by Tour de France. 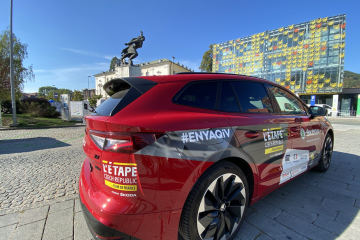 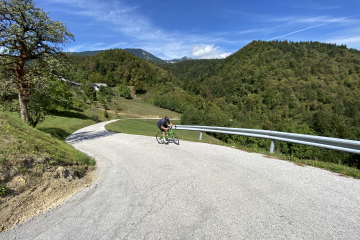 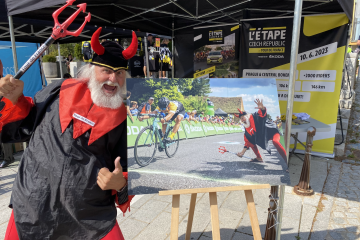 Saturday morning. "Get dressed and on the bike. You need to get your legs moving," my friend urges me. In a few minutes, I find myself in a company I don't belong in...

Zuzana Boháčová, twice third in the L'Etape Czech Republic, winner of the Slovak version, where she won both the climb and sprint events, and seventh by time in the French L'Etape du Tour. Her partner Ondřej Sobek, who would have been blown away by a stronger wind, and above all a seasoned hobby racer. A friend who would fly the long course of the Slovenian L'Etape averaging 32.1 kilometres a day later. Plus two cycling matadors. The first will finish seventh in the main race in Kranj and fifty-second overall. The second is preparing for the Istria 300.

The circuit? The short Slovenian L'Etape. "A bit much to get my legs spinning," I think. But there's no time to think. The group is already whizzing between Slovenian villages. The speed doesn't drop below thirty kilometres. And then the first hill, at the beginning of which I am startled by a gravel section because the new asphalt carpet has not been laid on the planned route.

A fast descent, and then a long climb. "I was surprised how hard it is," Zuzana Boháčová says.

I'm embarrassed when the winner and the other members of the group are waiting for me at the top. And she waits a long time. The narrow road between pastures full of cows and goats rises in places to a seventeen percent gradient. Five years ago, perhaps. But now it's a bit of an unequal battle.

As I successfully negotiate the steepest passage, Ondrej and Zuzana emerge from the forest. They've cooled off a bit in the shade, so they descend two kilometres from the summit to take a sharper interval.

No sooner do we swing over the top than we whizz down a long descent. And then... Another 30 kilometres on the flat. I watch the computer in disbelief. Speed: thirty-eight kilometres.

We're finishing the tractor. "I hope we don't overtake him," I think. Before I finish the thought, the boarding comes. The astonished farmer just smiles as the group "overtakes" him and disappears around the roundabout.

For me, it was an imaginary execution. I hang my legs in shame. Ten kilometres to go. Andrew waits and leads me back to the others. I finish among the smiling faces. It's a good thing my frustration can't be seen through my glasses. A few more turns and we're back in Kranj.

I don't know why they say someone can't feel their legs after a bike swing. I can feel them very clearly. I couldn't be more executed. Sixteen hours until the start of L'Etape Slovenia. A 20-minute ice-water shower will put out the fire in my thighs. The idea of doing the same amount of kilometres the next day, or even double it, seems like sheer madness...

I'll crawl to dinner because my body needs the energy. And it's stupid to ask a friend to deliver.

I'm so exhausted I can't fall a sleep. My legs are not spinning, but they're spinning... After a rather sleepless night and a rather nervous sleep, I feel surprisingly good. On the way to the start, even the fatigue is gone. "I hope it won't be as bad as yesterday," I mutter towards my friend. "No, it'll be worse," he smiles.

And he's not bluffing. The profile of the opening section is flat. Compared to the Czech L'Etape, there are no corridors at the start. Participants of the long and short routes start at the same time. The field flies like lightning. After ten kilometres, when it seems impossible to pick up the pace, Matej Mohoric passes us.

Winner of the Milan-San Remo classic, local cycling star. He's the patron of the Slovenian L'Etape, through whose village he'll ride.

The group I'm in is accelerating. But to keep up with the Primavera champion? In a few seconds, the large group resembles a necklace made of collar bones that breaks. I quickly gather my wits and slow down. Still, I get under the first hill and average thirty-five kilometres per hour. The initial climb stretches the field, or rather the second half of it, in which I'm moving.

And the first climbing bonus? In hindsight, I welcome the fact that I "know" the hill. What just a moment ago looked like a compact group is now a race of individuals.

A lot of energy is provided by the spectators standing along the course. And also the knowledge that even after a wasted cycling holiday I can overtake someone. Many of the riders give up the hill fight and push the bike. I'm not going down that far. I'm going to win my battle. When the climb gets from double digits to eight percent, I can push my heart rate below a hundred and seventy. Two more kilometres and I'm at the refreshment station. 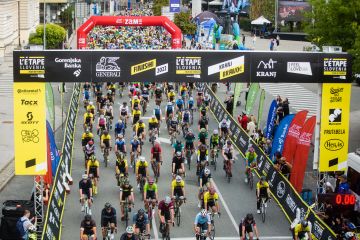 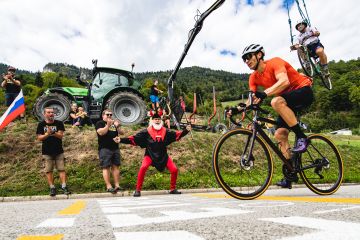 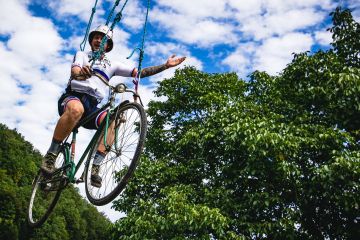 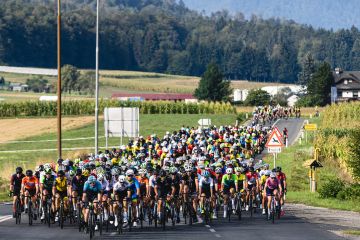 I scoop up some water and sacrifice another bidon to cool my burning feet. A few kilometres of undulating contours follow. And then a long descent. At the very first turn, one of the cyclists is "stuck" on a rock and the rescuers fix him on a stretcher.

A good reminder to ride sensibly and not overestimate the possibilities. A few hundred metres further on, three riders are "stuck" on the right-hand bend. A policeman on a motorbike urges them to carefully complete the downhill part of the initial part of the route, which the Slovenians have perfectly secured. In the second part of the starting field, there are also a large number of police motorcycles. The organisers are at every "taped" junction.

While the first half resembled a team pursuit, the second half turns into an individual time trial. After a few kilometres, I see a Czech flag on the rider's number. "Let's go together," I suggest. "I'm ready," he shakes his head.

Over a few hills, the road winds between fields through villages filled with groups of fans, from toddlers to grandmothers on sticks with rattlesnakes. Even cyclists struggling with only their limits cheer loudly. I'm almost a little sad that it's coming to an end. Especially knowing that the village of Podblica, home of Matej Mohoric, is another twenty kilometres away. The organizers have placed a fan point here, where Bengal fires are burning and fans sometimes push the cyclists on the seventeen percent climb...

The Slovenians left it up to each of the riders to decide whether to turn onto the long race route before the final climb. The heart wants to, but the head is clear. Arriving at the finish area just as the organisers are clearing the barriers is not an appealing idea.

And so I turn up the final climb. Two hours and thirty-one minutes. An average of just over twenty-five kilometres. And a great feeling riding in the L'Etape pack. I'm taking away the experience. And the motivation to train again for the start of one of the next installments of the series that falls under the Tour de France. Especially the Czech one on June 10, with which I have a score to settle. Thanks to L'Etape Slovenia.