Camp in Sobotín from the participant's point of view

Here‘s a fresh report from a long weekend in Jeseníky, where the first major event - the L'Etape Czech Republic bootcamp - took place.

After the camp had been postponed several times, the covid "climate" finally calmed down and allowed us to set out to a dream castle resort Sobotín for a joint multi-day event. We gathered in 16 riders, in a beautiful place, with great people, in a "baked" weather, and above all with a common motto: #jsemvbaliku.

The task was clear - to properly train the practical side of endurance, strength and technical orientation as well as the theoretical one, in this case meaning getting to grips with riding in a group elbow to elbow, racing tricks (read tactical thinking), workshops to improve performance and a lot of interesting information from the underbelly of the preparation of a professional cyclist.

For the packed program, a nutritious environment of the Hrubý Jeseník mountains was chosen. High hills, unforgettable views, quality roads with less traffic and luxurious facilities of the wellness resort Sobotín. However, we didn't enjoy the wellness too much as we had a daily bike sauna in tropical temperatures of 32 degrees Celsius. 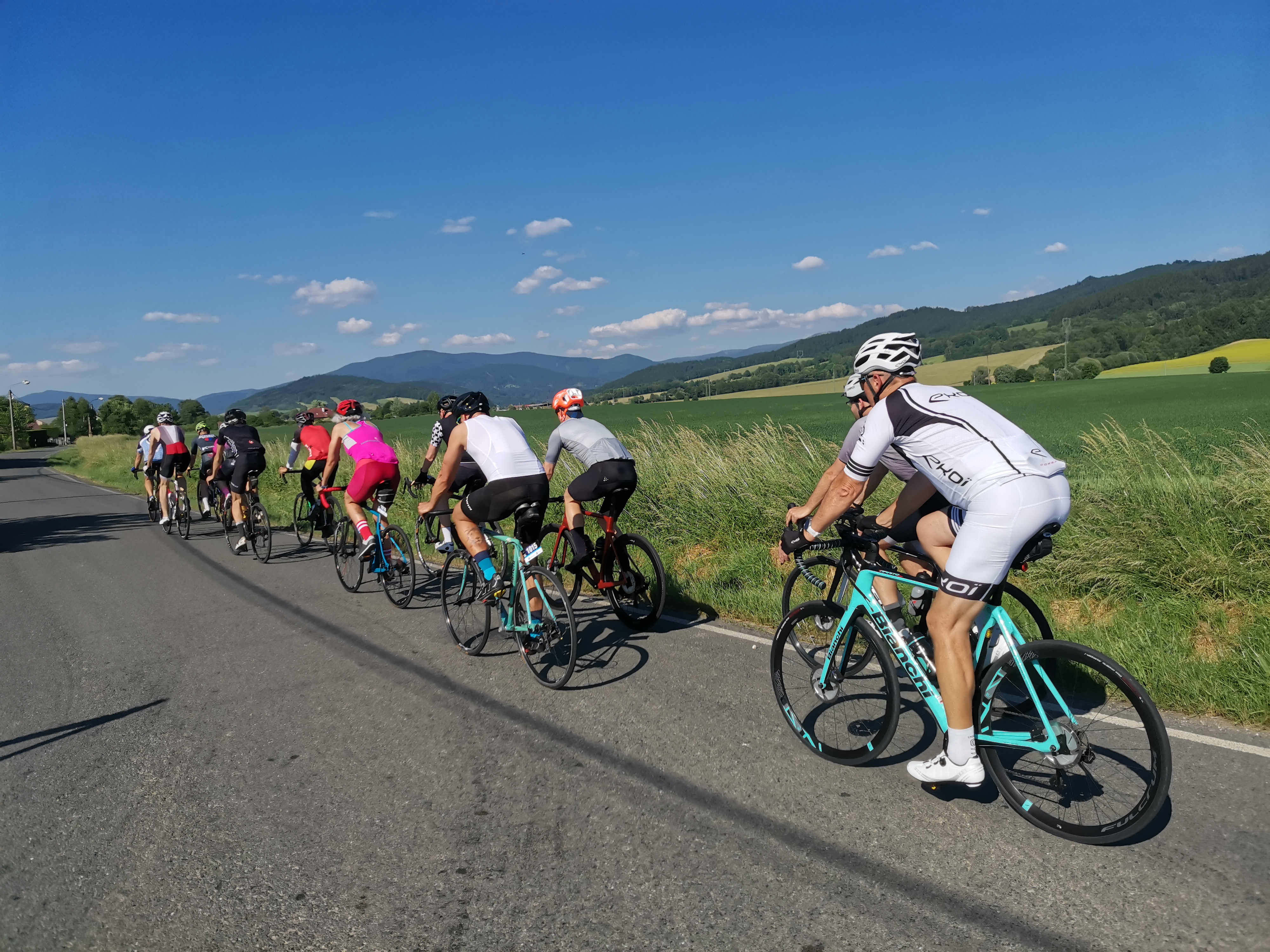 Friday afternoon we went for the first free training. The aim was to stretch our legs after the journey, to get to know each other and especially the basic rules of moving in a pack – i.e. in a group, when we ride as a whole with a single responsibility for the safety of the whole group. At a leisurely pace we visited Šumperk, where we cooled down with a stop for an ice cream, and back to the house. It was less than 30 km, mostly on easy flat terrain.

Responsibility for the correct running of the group went to our head coach Ondra "Lampík" Paur, who was constantly flying around the pack like a bee and pushing the cycling maturity and limits of each of us with healthy criticism. We felt calmer and more confident as the kilometres ticked by, even though we were riding close together and behind each other through twisting serpentines at a relatively high speed. And that was exactly the drill that we needed and that we could never get as solo riders.

The evening belonged to an official opening, where the head of the whole L'Etape Czech Republic project, Přemek Novák, welcomed all the bootcampers, introduced them to the program and the future outlook. Immediately afterwards, Jan Kubeš kicked off his workshop on proper breathing and we learned about other possible ways to improve our performance with Powerbreath breathing machines.

On Saturday, the "royal" stage was on the agenda. It led us to Červenohorské sedlo. Some of the bootcampers were literally loaded with "sharpies", so they went all out for the final three kilometres. Then gentlemanly returned to the coolies who were saving their ammo for later. On the next climb, Lampík introduced us to the correct execution of the power interval. A long descent towards Jeseník and hooray over the Ramzová saddle and other berms with amazing views of the Old Town area to the Králičák ski resort, where the Kolo pro život series was held. In the VIP tent we "sucked" all the fruit, chilled (non-alcoholic) drinks, thanked and headed back to Sobotín. A beautiful 120 km roasted and a total of 1750 meters climbed.

The pre-evening fitness workshop focused on CORE exercises and stretching was directed by elite Czech biker Mark Rauchfuss, who brought back a hot bronze medal from Saturday's KPŽ race Kraličák. "Ráfek" highlighted especially the parts that are most often forgotten during training and cyclists have them really weakened or shortened. A rich dinner followed, after which the restaurant staff had to literally chase us away, as our "engines" required a big energy replenishment. The pleasant evening weather and the conducting of long debates on all topics only let us go to bed before midnight.

The main point of Sunday's route was a trip to one of the monuments of Jeseník - the Dlouhé Stráně pumping reservoir. The unrelenting 9.5 km long climb was conquered by everyone according to their own standard of feeling. At the top, a short snack, a photo, enjoying the view of Praděd, and then back to Kouty, when it was ripe for burning our brakes. Fortunately, we had a mid-hill exercise for proper and smooth cornering - backing up. Lampík showed us how to blunt its sharp radius, and when to let off the brakes despite feeling scared.

A group of fast riders wound their way through two more smaller saddles under the guidance of Mark Rauchfuss, while the rest of us calmly made our way to the barracks. The balance was just under 90 kilometres and 1650 vertical metres.

Excellent accommodation, beautiful hills, great rides, good lunch at KPŽ and an interesting accompanying programme with lots of valuable advice and stories from guests and coach. It was a great long weekend. I’m looking forward to the next one.

Satisfaction and praise for everyone involved in the event! They did a great job, some already had experienced riding in a pack, but the majority were newbies who were used to navigating the roads solo. It's not easy to deal with the kind of stress of rolling at 50km/h and having other partners 30cm in front of you, next to you and behind you. Any hasty inattention can catapult you or the other person to the ground. It's a joy to see the progress. Friday's ride was lightly cuckoo like a swarm of flies, and on Sunday you're watching chiseled statues, lined up in pairs like a chessboard, grinding out each kilometer efficiently at a brisk smooth pace like a group of knights.

For more information about capacity and prices contact us at jfousek@letapeczech.cz.