Authentic trophy for the winner

L'Etape Czech Republic boasts an original trophy for the winner

For more than 10 years, designer Lars Kemper and his colleague Peter Olah have been designing trophies for the winners of the Tour de France. Now they have designed a unique trophy for the first edition of L'Etape Czech Republic by Tour de France, which will take place on Saturday, August 28. Like the 'grand Tour' trophies, the final product was created by Czech glassmakers from Lasvit. The renowned German expert explains his inspiration for the new trophy, describes the charm of Czech glassmaking and, last but not least, reveals his racing ambitions for the Saturday's race itself. 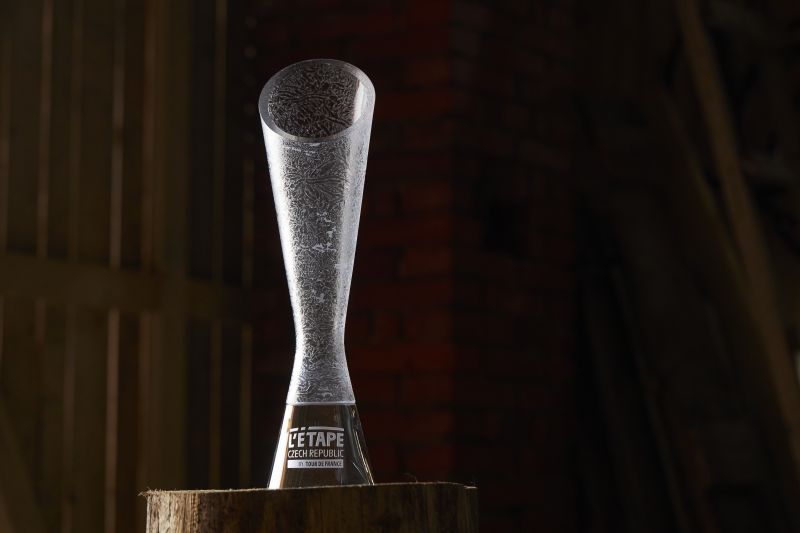 How did you come to work for the Tour de France?

It was mainly thanks to Peter Olah, with whom I have been working for more than ten years. Peter was first one of my clients and approached me while working for ŠKODA. He was flirting with the possibility of working with glass, but he didn't have much experience with it at the time. So we started working together. From ŠKODA, it was a straight path to the Tour. By the way, now Peter knows as much about glass as I do and we design every single trophy together.

What does it mean to you as a designer to create trophies for the Tour?

It's beautiful. As an avid cyclist, I get to participate in a creation of a trophy that I will never win as a racer. The trophy is also the point around which many themes literally and figuratively revolve during the Tour de France itself, so I feel a bit part of it. Creating it is really a great honour and pleasure for me. And I would also like to stress that I am really happy to have the opportunity to work with Lasvit, the trophy supplier.

The Czech Republic has a rich glassmaking tradition. Is it still regarded as a superpower in this respect in the world?

There is a huge tradition here, a respect for the craft. It's fascinating to me how Czechs have perceived glassmaking for generations; it's very much about emotions in the craft itself. It almost looked like the industry was going to disappear in the Czech Republic, but many glass companies have moved into a slightly different segment and have found customers literally all over the world. The glass industry in general is changing and evolving a lot. You can't quite compare how it's done in the Czech Republic and abroad. From my point of view, Czech glassmaking can be defined as a centre of quality and originality. That is why Czech glassmaking stands out in many ways compared to the world. The unique combination of honest craft, materials, design and crystals is what makes Czech glassmaking unique.  Not many people know it, but when the sun shines on Czech crystal, it shines much more than, for example, diamonds. Thus, master glassmakers in the Czech Republic work with a truly exclusive and very prestigious material.

What do you generally enjoy about working with glass?

What I find fascinating about glassmaking is that you can't cheat it in any way. Every piece of glass has to be worked properly and you can't skimp on anything. If someone doesn't have the budget, patience or skills to do it, it just can't be done. That's one of the reasons I love my job. I get the chance to work with great people, big companies like Lasvit and big projects like the Tour de France.

What does a designer feel when the best cyclists in the world are fighting for his trophies?

To be honest, I've always wondered what the winners of the trophy think of it. I want to know how they feel when they hold it in their hands for the first time on the podium. I am, of course, proud when the best cyclists on the planet grasp the trophy lovingly, but I simply wonder what goes through their minds and how they feel about the trophy. I quite miss the immediate feedback.

How do you feel about the global project L´Etape by Tour de France and have you participated in any of them?

It's a fantastic opportunity for cyclists of all abilities to experience the wonderful atmosphere of the Tour de France. The Czech event will be the first for me. I was already invited to Bratislava, but unfortunately I had a problem with my back, so I am even happier to be able to participate for the first time in Prague.

How did you come up with the idea to design a special trophy just for L´Etape Czech Republic?

This is due to the courage and imagination of the organisers. They approached Lasvit and then me and Peter. And we enthusiastically agreed. I enjoy their fervour, their care, their effort not to forget a single detail. The event is going to be fantastic precisely because they go the extra mile. With the heart and soul of cyclists.

What does the original trophy represent in your eyes?

It is inspired by cycling itself. The speed, energy and many other attributes that lovers of this sport find in every single turn of the wheel. In fact, in the modern world, design is a part of everything man-made. At the same time, I see it as a form of communication. Everything you see on the trophy is actually just my little part of the story. You could say that the design from the shape to the inscription is rather minimalistic. And you can also note that the simpler the design is, the more confident you have to be as a designer while using it. I have tried to create and design a trophy that represents and respects the sport, celebrates the winners and appreciates the extremely hard work that all the competitors have to go through to fight for it.

You will participate in the race itself as an active cyclist. Have you had a chance to see the course?

I'm so excited, I've already got my windcheater ready. Last week I went for a short ride around Křivoklátsko to get to know the track a bit. Anyway, I'm mainly going to enjoy it and since the forecast is calling for rain, we'll all have to be more careful on the bike.

How is such a trophy created? Take a look at this video.