Read a summary article about L'Etape Czech Republic from the iDnes POrtal:

L'Etape Premiere in the Czech Republic: Heavy rain, enthusiasm and triumphs of turek and sáblíková

L'Etape, the world project of cycling races under the banner of Tour de France, has arrived in the Czech Republic for the first time ever. On Saturday morning, around 1750, mainly amateur, riders started in Prague's Strahov. The overall winner, however, was the professional Daniel Turek. Ambassador of the project - speed skater Martina Sáblíková - then took a great 13th place and was by far the fastest among all women. 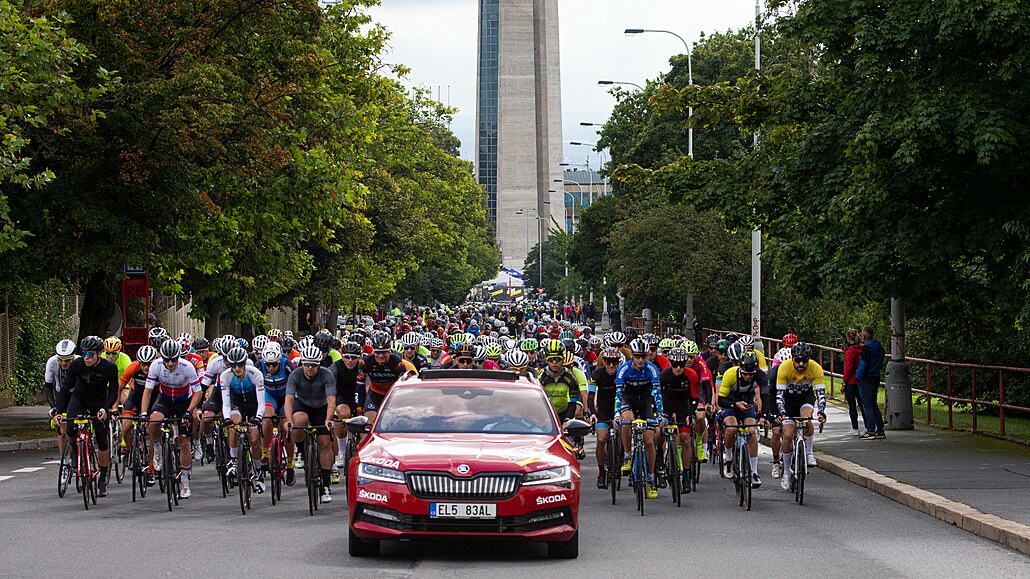 During the first edition of the project, the Czech public could finally taste the atmosphere of the most famous cycling race in the world. On their own skin. On their own bikes. On Czech roads.

Daniel Turek was the first to cross the finish line with a thunderous ovation, 43 seconds ahead of second-placed Michal Kollert.

"The first important point was the climb to Sýkořice, where it happened. We were going up the hill at five and then I saw Michal Kollert in front of me. I kept following him and it was just the two of us going over the hill after those 8-percent passages," Turek explained.

The two riders rode together in the breakaway for much of the race and gradually increased their lead. It was only in the final kilometres that Turek noticed his rival was running out of energy and rode for victory.

"At the Motol hospital I believed I had slightly better legs, so I tried to push it. I saw that I was a little bit off Michal, so I kept the pace for a while and by then I had about twenty seconds to spare. I got to the finish line fast, but not quite over the edge." 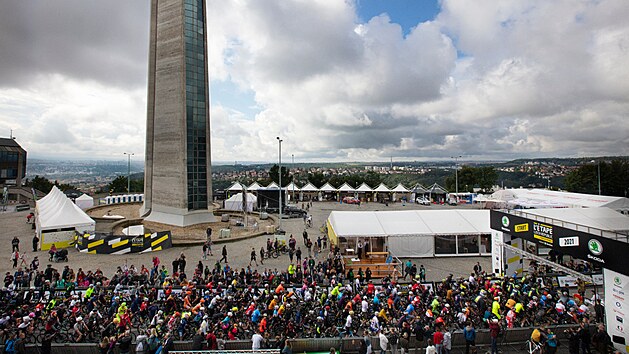 Martina Sáblíková received then another big cheer from the fans. She took the overall 13th place and won the women's category by more than five minutes ahead of her teammate from the speed skating team - Nikola Zdráhalová. The ambassador of the race competed more with the men on the track.

Apart from Sáblíková, the ambassadors were also Quick-Step's Zdeněk Štybar, who is currently riding the Spanish Vuelta, and Ján Svorada, the winner of three stage triumphs at the Tour.

The race was hosted by Prague and the Central Bohemia Region. The organization was taken care of by the companies Petr Čech Sport and Kolo pro život.

Both starts were preceded by a ribbon cutting ceremony. Moments later, the final ten-second countdown rang out loudly from the loudspeakers.

The competitors set off on the longer route at 9.45 am followed by a great applause of several spectators on the temporary main stands, built just next to the starting gate. Other fans then surrounded the barriers around the competitors and created a big noise by banging on the hard plastic banners. Just like at the finish line.

About an hour and a quarter later, after a torrential downpour, the other cyclists who had chosen to start at the lower distance joined in again with a great support from the enthusiastic spectators. Before the start, the announcer roused the hundreds of riders to Icelandic applause.

The shorter route descended shortly after Chyňava directly to Nižbor, avoiding the area of Lánská obora and the almost three-kilometre climb of the third category near Zbečno and Sýkořice with an average gradient of 5.8 %. 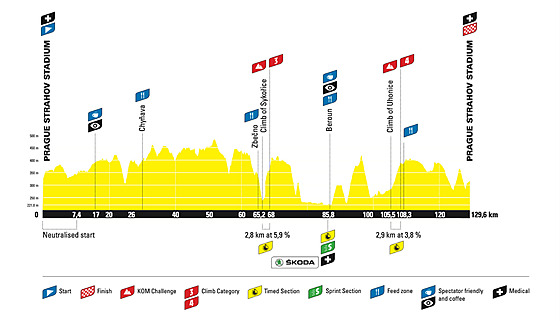 The organisers deliberately set the start and finish at Prague's Strahov. It was near the stadium where the World Cycling Championship was held forty years ago.

All participants then continued west through Hostivice. On the longer route, the cyclists also went in a northwesterly direction through the northern area of Křivoklátsko. Then, after turning around and climbing the mentioned ascent, they pedalled south to Nižbor, where the complete starting field combined again.

The sprint challenge was nicely located in Beroun, from where the riders continued further north and later also in the northeast direction. 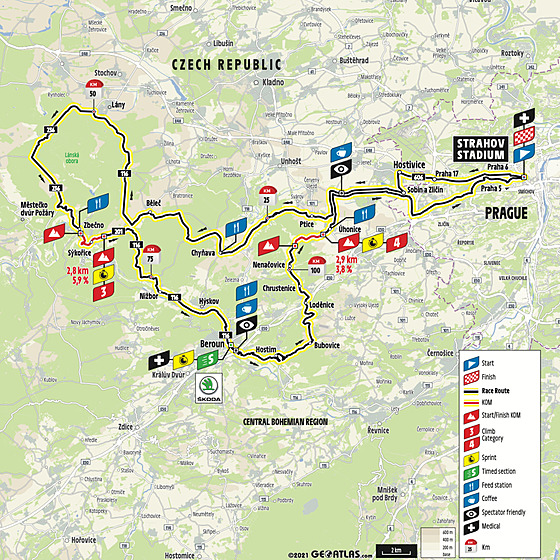 Before arriving in Úhonice, there was an easier three-kilometre climb of the fourth category with an average gradient of less than four percent. Then the riders headed east back to the capital city.

There was also an unpopular time limit for the race, which the organizers set at five o'clock in the afternoon. A vehicle was allowed on the track, reopening the roads for regular traffic. Cyclists who were overtaken by this vehicle were withdrawn from the race by the organisers.

However, it was not only the riders who enjoyed the environment of the event associated with the most famous cycling event in the world.

The L'Etape Village was spread out in Strahov, which could be visited by fans under security measures. From Friday onwards, the organisers and race partners prepared a rich accompanying programme for them. Including a fun tracking game and a Tour de France museum. 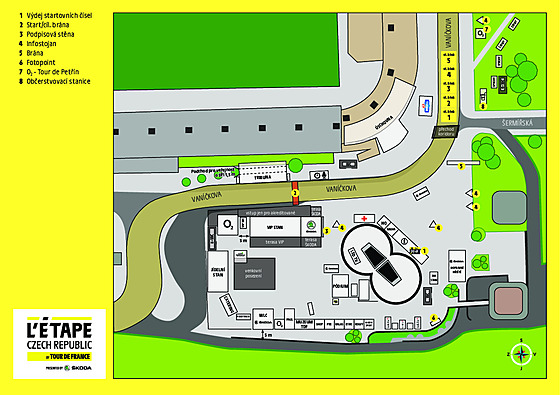 "The Tour de France Museum was created in combination with our colleagues from A.S.O., who provided us with all the stuff. You'll find decades-old jerseys, trophies, the official Tour de France bike. It's been one of the most crowded stands since the morning, so we probably hit the selection of things," added communications director Tomáš Pravenec from co-organising agency Petr Čech Sport.

The second fanzone was located at the sprinters' segment in Beroun. Here too, the visitors created a great atmosphere and the winner Daniel Turek described this place as the best on the track.

And what does the future hold for L'Etape in the Czech Republic? So far, there is no indication that this connection will be broken up in any way. The response abroad has been positive, even according to Pravence.

"We have a three-year contract with A.S.O., so we have at least two more editions to come. We can see from the reactions from France that it is working. We would like to extend the cooperation... Now we are thinking whether we will stay in Prague and the Central Bohemia Region. We also want to add other activities like night races and hill sprints, which we got the green light for from A.S.O."

The L'Etape by Tour de France project is designed to provide the cycling public with an otherwise hard-to-find experience of the French Grand Tour in one stage. It is sponsored by A.S.O., which also organises the Tour de France.

Riders compete in team or individual categories on closed routes. They can look forward to climbing and sprint challenges. After the race, there will be a ceremony with jerseys and trophies typical for the three-week race.

The series have already visited or will visit several countries and major cities. This year, for example, it was held for the first time in Madrid, Spain, and Slovakia. In the near future, it will also visit Indonesia, Malaysia or Edmonton in Canada. So far, exactly twenty countries from all over the world have joined the project.