An experience of experiences! Lanterne Rouge winner on how L'Etape enchanted him

He won! Over himself. Over his own doubts. Over a tough course. The merciless heat. And for all the family who supported him at the track and provided service, he was a winner. And for many of his friends. After two years of cycling, David Ruzicka finished L'Etape Czech Republic by Tour de France 2022. Last classified.

"Crossing the finish line got me very emotinal that I was glad for the goggles on my eyes. And I knew immediately that I would be at the start again next year," says the forty-three-year-old athlete.

He has played football since he was a child. In Kladno, he used to play the highest competition in the youth. Then he was on the green turf in the lower competitions and cycling did not mean anything to him. "I had a mountain bike from a chain at home and sometimes I would sit on it to ride around the house," he recalls.

When he became a father, he stopped using the bike. It was a random coincidence that brought him back to the bike. "A friend convinced me that we would ride along the River Berounka with a sleeping bag and a tent. The day before we left, he called me that he couldn't make it. But I had everything ready, I was off work, so I sat down with a map, found the highest point in Brdy and set off with a backpack on my back," he recalls.

The bike became his safe place

It was an experience rather be forgotten. "The sitting part of my body was ripe for medical treatment," he says with a smile. Nevertheless, he began to sit in the saddle more often. Year later, in the summer of 2020, he set off alone along the River Ohře. "On a mountain bike again and for the last time. I kept riding, never got a ride anywhere. So, as soon as I got home, I headed to the shop where I had my eye on a gravel bike. Instead of looking at it, I took it home."

During the coronavirus pandemic, he had plenty of time for cycling. Last year, for the first time in his life, his mileage topped two and a half thousand in one season. He managed an individual trip along the border, covering the Šumava region in four days and climbing over seven thousand metres. "Cycling has become a relaxation for me. I realised that football was no longer for me. In the saddle, I get to discover the landscape, wander through nature. Moreover, I lost twenty kilos, so every hill became easier," smiles David Růžička.

As a volunteer, at the end of the summer of 2021, he enforced traffic restrictions during the first edition of L'Etape Czech Republic by Tour de France. "I was thrilled by the atmosphere," he recalls of the Czech premiere of the biggest race for amateurs still marked by the covid-19 pandemic. 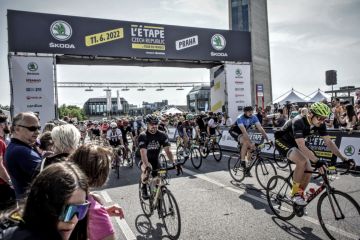 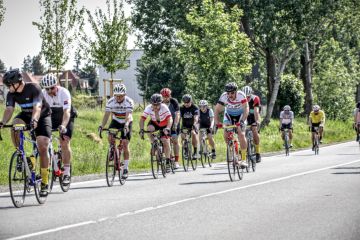 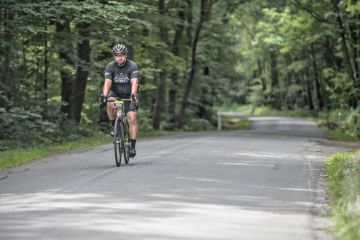 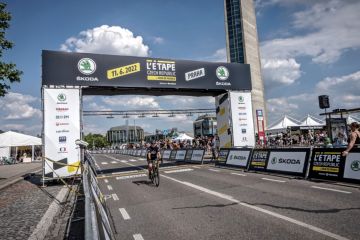 He was afraid of disappointing himself

During the winter last year, he got ill and his training plan got interupted. When bronchitis set in twice, the mileage was desperately low compared to the previous year. "I was off the saddle for two and a half months," he grins.

As soon as his health permitted, David Ruzicka was back in the saddle. "I don't have to explain the joy of riding to people who cycle regularly," he shrugs.

In mid-May, he the challenged himself and registered for the L'Etape Czech Republic by Tour de France 2022. I hesitated for a few days. In the end, I accepted with great apprehension. I was afraid I would disappoint myself. It was clear to me that if I didn't complete the route in the time limit, I would be heartbroken. Neverthless, since I decided to quit football for good, I took L'Etape more or less like a sign from above," he says.

He had minimal time to prepare. So he rather listened to the advice of more experienced cyclists. Then the D-Day came... "The night before the race I slept well. I had two glasses of white wine and had no problem," describes the casually original preparation of the guy who completed the route on a gravel frame with road shoes.

"When I arrived to Strahov I was extremely nervous. I had no experience with racing. And I had never ridden this many kilometres in my life. The most I've done was 120km. I grabbed a coffee in the village, started to notice the other cyclists and everything fell off me. I was calm at the start."

He stayed calmed and rational

He had a position in the last starting wave. "Everyone advised me not to panic, especially at the start. And I stuck to that. I didn't worry about in what place I was going to finish. For me, the main thing was to finish and complete the course in the time limit. I knew before the start that I would not be the fastest. But I was going at a constant pace and my family helped me a lot along the route," he says. "With the exception of the snack bar in Chyňava, I didn't stop anywhere. I had people close to the track who gave me bidons and food. If I had stopped somewhere, my legs would have gotten numb and I would have not been able to ride again."

David Ruzicka did not experience anything like that. He managed the battle with a route 136 kilometres long and an elevation gain of 1918 metres without a single crisis. "I wouldn't have finished at twenty because I wouldn't have listened to the advice of the more experienced. And I wouldn't be able to split my strenght. It helped me a lot that I was from the area where I was riding and I knew all the hills. The only hint of trouble came between Ptice and Hájek. It's not actually a hill, but I was struggling. Luckily I had help from three guys from Short Route. And then I rode calmly. I passed Motol and Spiritka without any problems," he says.

As he passed through the finish gate at Strahov, he shouted with joy. He completed L'Etape Czech Republic by Tour de France 2022 in 5:45:05.6 hours. "Maybe someone won't believe me, but I truly enjoyed it. Every minute, every kilometre. It was the best experience of my life ," he emotionally  says as he reflects on nearly six hours of toil in the saddle, accompanied by the scorching heat of the sun.

He crossed the finish line 845th, the last classified. He was on the track for two hours and fourteen minutes longer than the winning Michal Kollert. More than two hundred participants of the Long Route stayed behind David Růžička. They failed to make the limit or withdrew. "It's fourteen days after L'Etape and I'm still satisfied. Just like I was at Strahov when I crossed the finish line. I knew right there that I wanted to be at the start again next year. Because of the emotions the race brought me. Because of the atmosphere, which was unique and the people cheering us on at the end," he praises the fans along the route.

The fact that the rules have changed for next year and the imaginary defence of the red lantern, or Lanterne Rouge, will not take place, he accepted without emotion. "The fact is that the Long Route is just iconic. Anyone who was in the peloton will ride the hundred. So I'm sorry I won't have a chance for the long one. It's such a great and unique experience. But I understand the organizers. I could argue that I'll train hard and get to the average I need. But I'm realistic. Like I was at the start. And it paid off. So I'm gonna do the Medium Route. And I'm gonna enjoy it like I did this year. Every minute, every kilometer. Because L'Etape is unique in my eyes," says David Ruzicka who’s looking forward to June 10, 2023.